I am reading Agner Fog's optimization manuals, and I came across this example:

Agner indicates that there's a way to optimize this code - by realizing that the loop can avoid using costly multiplications, and instead use the "deltas" that are applied per iteration.

I use a piece of paper to confirm the theory, first... 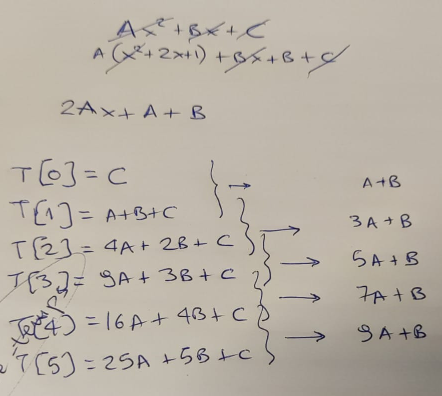 ...and of course, he is right - in each loop iteration we can compute the new result based on the old one, by adding a "delta". This delta starts at value "A+B", and is then incremented by "2*A" on each step.

So we update the code to look like this:

In terms of operational complexity, the difference in these two versions of the function is indeed, striking. Multiplications have a reputation for being significantly slower in our CPUs, compared to additions. And we have replaced 3 multiplications and 2 additions... with just 2 additions!

So I go ahead and add a loop to execute compute a lot of times - and then keep the minimum time it took to execute:

I compile the two versions, run them... and see this:

Well, that's unexpected. Since we report the minimum time of execution, we are throwing away the "noise" caused by various parts of the OS. We also took care to run in a machine that does absolutely nothing. And the results are more or less repeatable - re-running the two binaries shows this is a consistent result:

The only thing to do next, is to see what kind of code the compiler created for each one of the two versions.

objdump -d -S shows that the first version of compute - the "dumb", yet somehow fast code - has a loop that looks like this: 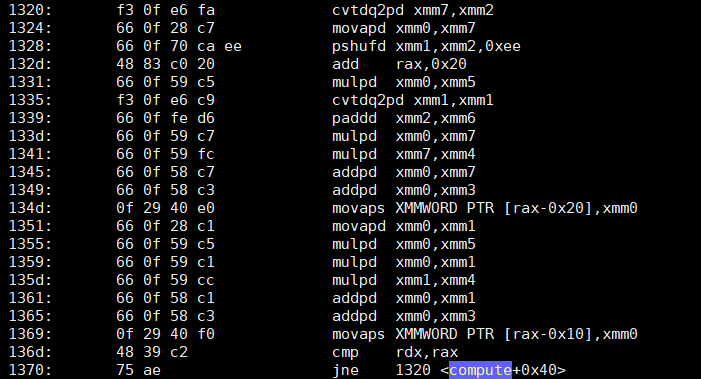 What about the second, optimized version - that does just two additions?

Now I don't know about you, but speaking for myself, I am... puzzled. The second version has approximately 4 times fewer instructions, with the two major ones being just SSE-based additions (addsd). The first version, not only has 4 times more instructions... it's also full (as expected) of multiplications (mulpd).

I confess I did not expect that result. Not because I am a fan of Agner (I am, but that's irrelevant).